Iconic Canadian retailer ‘The Bay’ has just announced they have ironed out a deal with British fashion retailer ‘Topshop’.

After months of speculation about the U.K. brands move to Canada, managing director for Topshop Mary Homer says, “We’ve wanted to open a stand-alone store in Canada for some time and the large site within The Bay allows us to bring the full Topshop experience to the customer in an undiluted way.” It was also announced that Topman, the fashion forward menswear branch of the company, will also be heading to the great white north, making us among the 37 countries that currently carry the brands. The deal gives The Bay exclusive franchise rights for Canada, allowing it to open both shops within its stores but also stand alone stores. We previously reported on Topshop, when the company first ‘tested the waters’ in Canada, opening up in Jonathan + Olivia Boutique near Queen and Ossington.

The move will most likely be very profitable for The Bay, but could also rekindle the love for the ‘department store’ retail model that is unfamiliar to the younger mall shopping generation. With The Bay’s very large stores, like down-town Toronto’s flagship location that offers a whopping 1 million square feet, there will be plenty of room to house the collections which are rumoured to take up 5,000 to 20, 000 square feet. “We couldn’t be more excited about adding Topshop and Topman to The Bay’s growing roster of fashion finds” said President and CEO Bonnie Brooks. “Both Topshop and Topman have a brave and irreverent approach to style that has captured the imagination of the fashion concious shoppers and industry insiders alike.”

Topshop is internationally renowned for collaborating with young designers as well as some of fashion’s most iconic names like Celia Birtwell and Kate Moss. They currently operate a retail shop in New York and have over 210 stores in their native Britain. The first Canadian Topshop/Topman collection will be released in Toronto, but for those of you who can’t wait to own a piece or two right now, visit Jonathan and Olivia and Topshop’s online shop still ships to Canada! 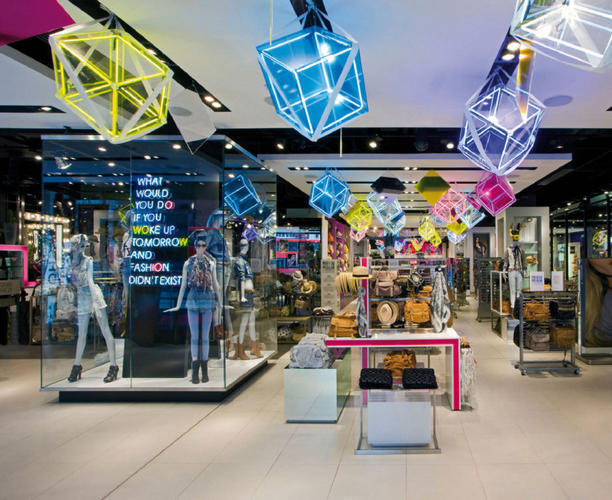 Fulton Umbrella on a rainy day