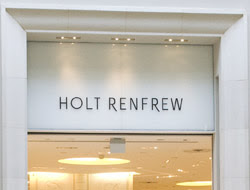 This story is a bonus for both Yorkdale Mall shoppers and Holt Renfrew fans. It was announced yesterday that Holt Renfrew’s location will be larger and completely renovated to anchor the new luxury wing of Yorkdale Mall. The new location will add 40% more retail space, from 51,000 sq. ft. to 70,000 sq. ft., with all of the construction to be completed by the holiday season in 2012.

“We are excited to celebrate the success of such an iconic mall as Yorkdale with an expanded Holt Renfrew store. We have an outstanding team in place, with a loyal customer base, and with this expansion we will be able to offer our customers more of the brands they love,” said Holt Renfrew President Mark Derbyshire.

This is definitely a smart decision by Holt Renfrew, as Yorkdale Mall has seen high-end luxury retailers such as Burberry and Tiffanys pop up in recent years. This remodel will not only allow more designer clothing to be offered, but we’ve been told to expect some great displays and visuals when the store is completed. The existing Holt Renfrew store at Yokdale Mall will be open during construction, and be sure to check back here, as we will bring you any updates we get about the progress.